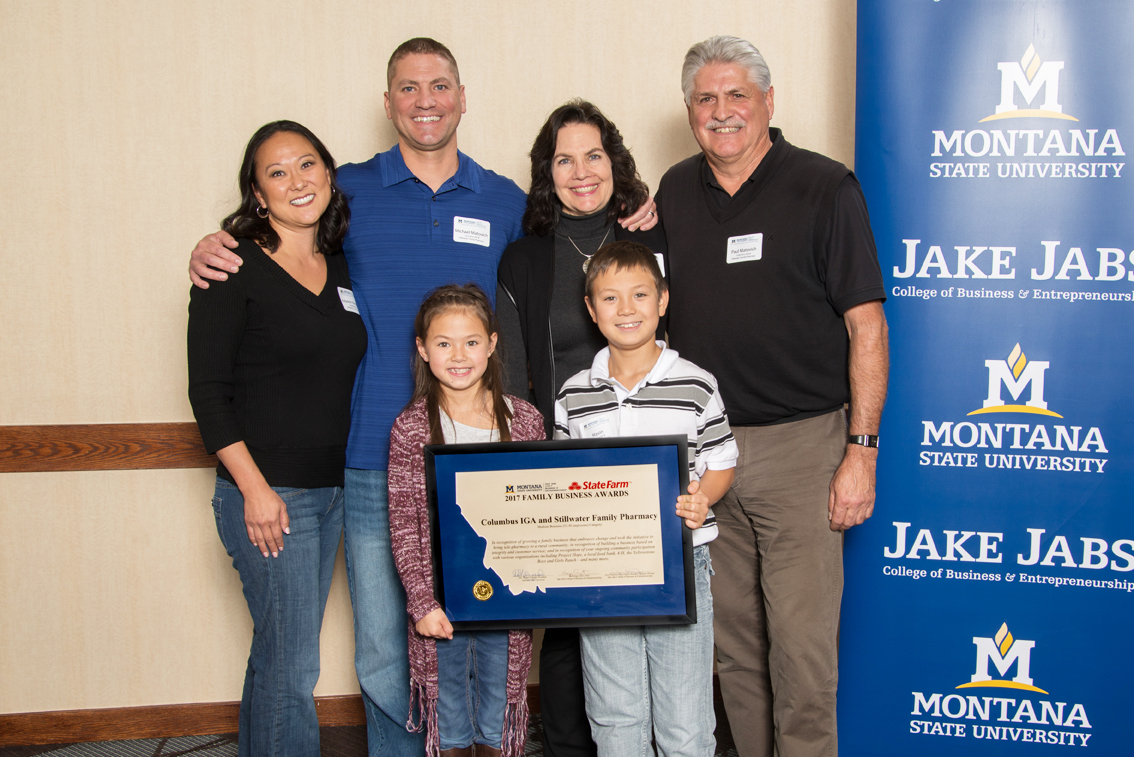 Columbus IGA and Stillwater Family Pharmacy has been awarded the 2017 Family Business Award from the Jake Jabs College of Business & Entrepreneurship at Montana State University.

Founder of Montana Family Pharmacies, Mike Matovich, his wife, Rebekah, and parents, Paul and Joanie Matovich, were nominated for the award in June. After an application and review process, they were chosen for and presented with the award for medium-size businesses on October 6th. Six other multi-generational businesses of different sizes from around the state were recognized as well.

George Matovich bought Davis Thriftway in 1973 with minimal knowledge of the grocery business. When George bought the business, he had 5,800 square feet, but within two years after purchasing, the business had doubled and in 1977 remodel plans were set to begin. He added 3,000 additional square feet of floor space that included produce coolers, a large walk-in freezer and meat coolers.

George had a daughter and two sons and put all three of his children through college with all of them working at the store in some capacity. In 1975, George’s middle son, Paul, an Eastern Montana College graduate (now Montana State University-Billings) who had been working for the United States Postal Services in Provo, Utah, decided it was time to come back and join his father in the family business.

Paul took over the reins and in 1987 added a retail pharmacy to the book of business.

Fast Forward to 2017, Paul has expanded George’s original hardware and grocery store through many remodels and upgrades to the 32,000-square foot supermarket and pharmacy that it is now.

Paul also has a daughter and two sons. Each of Paul’s children worked through high school and college for the growing business, from the deli, to unloading delivery trucks to helping people out to their cars with their groceries. It was also Paul’s middle son, Mike, that came back to the business after getting a degree from the University of Montana to become a Registered Pharmacist. After graduation, Mike moved to Portland, Oregon and was managing one of Costco’s busiest pharmacies in the country.  It was then that his father found himself without a pharmacist, so Mike decided that this was his time to step back into the family business.

Mike moved back to Columbus and quickly set in roots for himself and his family. He and his wife, whom he met working at the pharmacy in Portland, quickly immersed themselves not only in the business of the store, but quickly became active in bettering pharmacy in the state of Montana. Mike not only works at the family business, but offers his services to the local hospital, sits on a national board for independent pharmacies, pioneered Montana Family Pharmacies to unite independent pharmacies in the state, participates in the University of Montana’s Board of Visitors panel, consults for several health care entities around the state and is actively involved with the Montana Pharmacy Association. Rebekah has sat on the Montana Pharmacy Association Board, works as a Pharmacy Technician at the pharmacy, and currently sits as Vice President of the Board of Pharmacy.

The Matovich Family and thus the business has always been active in community affairs, beginning with George. He was extremely active in community, church and civic affairs.  He was instrumental in starting the first businessman’s group in Columbus, which later became the Chamber of Commerce. One author noted that “He spent many a long evening after a long day at meetings for the social and civic welfare of the people of Columbus, Stillwater County and most of all his family; which may sound like a lot of trivia but boils down to what George maintains is running a business.”  George is quoted as saying “his business is the backbone of his success but people structure that backbone.”

Paul took that statement to heart. The Columbus IGA & Stillwater Family Pharmacy donates to almost every organization, local fundraiser, school and sports function in the town and surrounding community. IGA supports the Stillwater Youth Center, a non-denominational church group with donations and volunteer time as they assist the youth in Stillwater County. They are financial supporters of the Yellowstone Boys and Girls Ranch, 4-H, Columbus Community Foundation, Stillwater Billings Clinic, the Museum of the Beartooths and the local library to name a few. They are active participants with school programs through all age groups. The High School Home Economics learns about grocery shopping, staying within their budget, along with learning and performing tasks that are required to gain and maintain a job. Preschool and Elementary students tour the store and go behind the scenes to see all the activities of running a store.

The store held a campaign to Help Fight Hunger by selling ribbons and then proceeded to match those funds to Project Hope, a local social service who received matching monies worth of canned and dry goods. IGA also supports the elderly by taking phone orders and delivering the groceries to their front door.

Mike has taken his contributions further out into the state as well as his home community. He currently sits as President of the Board of Stillwater Billings Clinic Hospital. Mike also has contracts as an advisor to Rimrock Treatment Center, Yellowstone Surgical Center, Employee Benefit Management Services, Inc (EBMS) and the State of Montana, Health Care Benefits Division. He has taken an active role in looking at state employee benefits and how to best utilize Montana taxpayer’s dollars. He has sat as a board member for McKesson’s National Independent Advisory Board which strives to further the betterment of healthcare with Independent Pharmacy owners and currently sits on Cardinal’s National Independent Pharmacy Board.

Mike also started Montana Family Pharmacies. As the only remaining pharmacy in Stillwater County, Mike believes that small, hometown pharmacies have a valuable place in healthcare and is outreaching to those independent pharmacies in the state to help them make the most of their businesses in their local communities.

The pharmacy participates in health fairs, Stillwater Gets Fit, and has participated with the University of Montana’s IPHARM program “ImProving Health Among Rural Montanans.”

Rebekah volunteers at the local elementary school and is a volunteer leader at the Stillwater Youth Center on top of her duties as a pharmacy technician and her role on the State Board of Pharmacy.  She has drafted a grant that was awarded to present to each of the local schools on the topic of Misuse and Abuse of Prescription drug use.  She participated and  presented at the local middle school career fair on the future of pharmacy.

The whole family supports Alzheimer’s Awareness and has won the Largest Family Participant Award at the Walk to End Alzheimer’s Billings Event.

The Matoviches firmly believe the key to their success lies in simply treating each of their customers as family and how they would like to be treated – to have integrity in everything they put their hand to, and to go above and beyond in all they do.

In looking to the future, the business has been dedicated to the advancement and development of new and trending business practices, embracing change and not being afraid of it, recognizing that technology is rapidly advancing and so must their business practices.

Congrats to the Matoviches from the Montana Family Pharmacies team – and member pharmacies! – on receiving this prestigious and well-deserved award!

LATEST FROM OUR BLOG